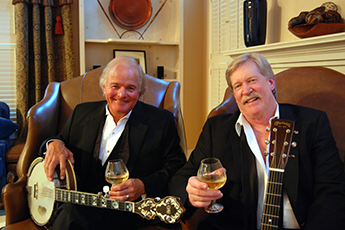 Come experience for yourself, the high-energy, hard-kicking, blow-the-roof-off band that has had capacity crowds around the world dancing in the aisles to party favorites and reminiscing with memorable ballads. No matter what age, Banks & Shane transport fans back to Spring Break.

Banks & Shane is “Atlanta’s Entertainment Tradition,” combining exceptional talent, consummate showmanship and professionalism, and over forty years of experience. The Banks & Shane band is comprised of Banks Burgess on banjo and guitar, Paul Shane on guitar and trombone, Chuck Shane on drums and bass, Jim Durand on Electric and acoustic guitars, and Dennis Law on drums.

Banks and Paul began playing music in Atlanta in August 1972. Over the years, the band has performed around the U.S. and around the world, on concert stages, nightclubs, ski resorts and almost every venue imaginable. Banks & Shane has recorded 12 albums since 1972. They owned and operated one of Atlanta’s most popular restaurant/supper clubs, “Banks & Shane’s” in Sandy Springs and Underground Atlanta from 1983 – 1992, and have traveled to Munich, Frankfurt, Amsterdam, and London, representing the Atlanta Convention & Visitor’s Bureau, Delta Airlines, and The Georgia Hospitality and Travel Association.

Come join The Arts Council for a great evening of music, friends, and fun!