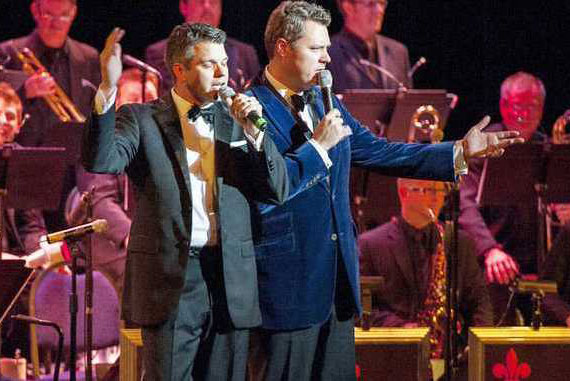 BIG BAND FOR THE NEW GENERATION

Meet your next two friends – Jeremy Davis and Clay Johnson, along with their fiery hot big band!

All across America, audiences have fallen in love with these two sophisticated Southern gentlemen and the high-energy show that is Davis & Johnson Present the Fabulous Equinox Orchestra. Along with the greatest songs, wonderful original arrangements and phenomenal musicianship, these two bring their rich friendship and charm to the stage. Davis & Johnson put their own stamp on the Great American songbook, graced with a touch of Sinatra, Motown, Ray Charles, Johnny Cash, Elvis and more, offering a freshness and relevance that speaks to every soul.

Clay Johnson, The Voice, The Trombone, “Mr. Showtime”
Raised in a family of preachers, teachers and folk/Southern gospel singers, Clay was born to inspire and entertain. His passion for music performance began during childhood and grew with over thousands of concerts, musicals and shows. He has performed on stages from L.A. to NYC — from volunteering to sing at his children’s school or crooning for the senior citizens center to singing at festivals, arenas, and sold-out theaters. At the same time, his love for the gospel has taken him all around the U.S. and the world — including Ukraine, India and Ethiopia — to work with churches and communities as a minister and missionary. Clay and his wife enjoy raising their children and her chihuahua in Savannah, GA.

Today, the group continues to gain serious traction and find success as the first “southern big band”. This band is unlike any other, and the terms “orchestra” and “big band” don’t even begin to scrape the surface of all that the group offers. Their diverse repertoire covers the songs and sounds from the classic Rat Pack-style big band, to the smoky Cabaret-style quintet, to the funky Motown dance band with horns. This group does it all and pays homage to the culture that raised and inspired them. They are most at home performing the toe-tapping French Quarter, NOLA-style street parades.