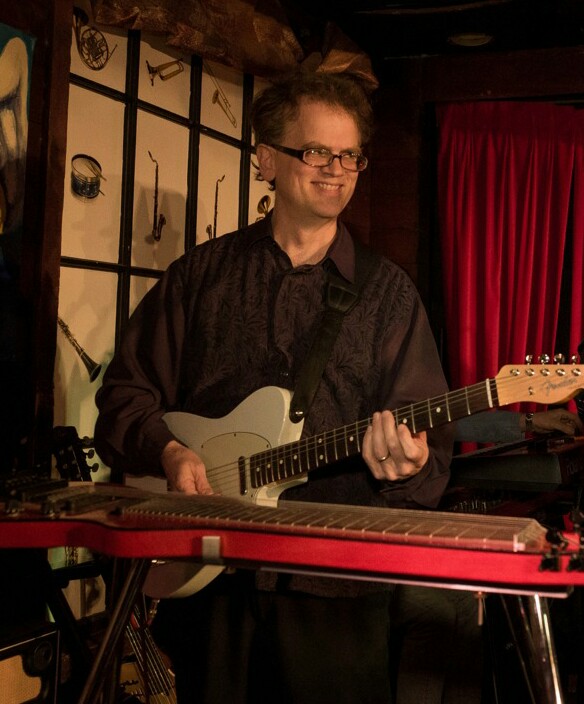 One of the most in-demand guitarists on the Atlanta scene.

Rochester, NY native Steve Cunningham began playing guitar at age 14, where he was influenced by such diverse artists as Led Zeppelin, Pat Metheny, Yes, and the Brecker Brothers, as well as classical and bluegrass music. After years of playing and touring with various rock, country, and Top 40 dance bands, including his own original instrumental rock trio “The Value of X”, Steve released his first solo CD, “Travels”, in 1995. Featuring blazing, yet tasteful electric, acoustic, and slide guitar playing, “Travels” still enjoys steady sales, as well as daily airplay on national radio.

One of the most in-demand guitarists on the Atlanta scene, Steve performs over 200 dates a year playing jazz, R&B, rock, funk, gospel, country, blues, pop and western-swing, among other styles. He has played with Grammy nominated Susan Tedeschi, long-time members of the James Brown band, and Grammy Award winner William Bell, as well as opening for Jeff Beck, The Barenaked Ladies, Kool and the Gang, Dream Theatre, The Four Tops, Chuck Mangione, and Blondie. In addition, he has performed at the Southeast Emmy Awards, The World Series, and headlined at Caesar’s Palace in Las Vegas.

Steve is a first-call session player, playing on hundreds of local and national CD releases, TV and radio commercials, and movie soundtracks. He has recorded for Coca-Cola, Ford, IBM, Cartoon Network, Microsoft, CNN and NASCAR to name a few, as well as recording with the London Symphony Orchestra.