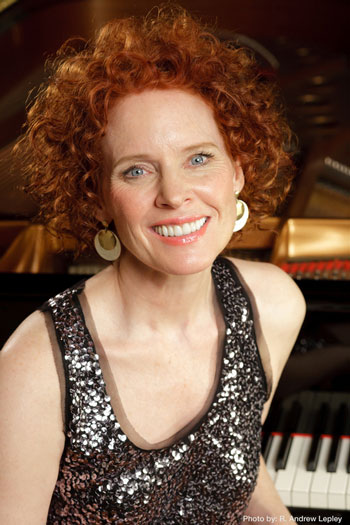 We are currently sold out of tickets to this event. If you would like to be added to the waiting list, please call us at 770.534.2787. We typically have additional seats available in the atrium on the night of the performance, and will be able to seat you as seats become available

“Lynne Arriale’s remarkable career is graced by a rare commitment to authenticity and vulnerability defined by careful craft and high artistic standards. It is precisely this willingness to remain so emotionally exposed that makes her performances so accessible to music lovers of all kinds.”

Pianist/composer Lynne Arriale’s career is graced by a love of melody and a joy of musical discovery. Arriale has performed on international concert and festival stages over the past 25 years.  The consummate storyteller, she immediately connects with her listeners.  JazzTimes wrote, “She achieves a special, deep connection with her audience, and the energy flows both ways. Arriale’s emotional authenticity allows her audience to feel and think along with her… Lynne Arriale’s music lies at the synaptic intersection where brain meets heart, where body meets soul. She is one of jazzdom’s most intensely unique voices.”

At the core of Arriale’s appeal is her ability to communicate with her band and listeners. “The poet laureate of her generation” (Jazz Police), her performances and recordings with her trio have led to comparisons with the great trios of Bill Evans and Keith Jarrett, yet she has been consistently praised as having a “singular voice” as a pianist, leader, composer, and arranger. “I really can’t compare her to anyone,” said recent collaborator and multi-Grammy winner Randy Brecker. “Her music transcends the word ‘jazz’ – it is just pure music.”

Arriale was the first prize winner of the 1993 International Great American Jazz Piano Competition, and soon launched her touring and recording career. Her 13 CDs as a leader have topped the Jazzweek Radio Charts; Inspiration and Arise reached #1 and Come Together #3, Nuance #4, and have been named to numerous “Best Of” lists, including The New Yorker and United Press International. Her tenth trio recording, LIVE (CD/DVD) was named one of UPI’s Best Jazz CDs and among The New Yorker Magazine’s Best CDs of the year. Solo was named one of the top CDs of 2012 by JAZZIZ Magazine, and Convergence was named one of the top 50 CDs of 2011 by JazzTimes.

A devoted educator and Yamaha artist, Arriale is currently Professor of Jazz Studies and Director of Small Ensembles at The University of North Florida in Jacksonville. She has served as a faculty member of the Jamey Aebersold Summer Jazz Workshops, the Centrum Port Townsend Jazz Workshop, the Thelonious Monk Institute in Aspen and numerous clinics and workshops worldwide, including the US, UK, Europe, Canada, Brazil and South Africa. She is a member and piano pedagogy representative of The Jazz Education Network and has adjudicated the Montreux Jazz Competition, American Pianists Association Fellowship Awards, The Kennedy Center’s Mary Lou Williams Competition and the Jacksonville Piano Competition. With jazz icon Toshiko Akiyoshi, she was a featured mentor at The Mary Lou Williams Emerging Artist Workshop at the Kennedy Center.

Arriale’s affinity for music and specifically the piano was evident early on, but well outside a jazz context. Adopted as an infant, she grew up in Milwaukee and was given a plastic toy piano at age 3. Playing by ear, she soon had a repertoire of songs that she had learned from the radio and records, mostly from Broadway musicals. Throughout her school and college years, she studied classical music, earning a master’s degree before turning to jazz. “Discovering the unlimited creative potential and artistic freedom in jazz changed my life,” said Arriale.

Later she learned that her biological mother was a jazz vocalist. Perhaps there is something to heredity, given her reverence for songful melodies. Motema Music’s founder, Jana Herzen, refers to Lynne’s “singer’s-like” ability to connect with an audience… “Though she played the piano and not a sound came from her lips, I had the distinct impression I was listening to a singer.”

Arriale always sings when she is practicing and composing. “I have found that the key to expressive playing and truly spontaneous improvisation is singing,” says Arriale.” I focus on the melody regardless of where spontaneous improvisation takes me. I search for the ‘heart’ of the song, find what makes it special to me and use it as musical inspiration. It is very important to me that my music has a vocal quality and a heart connection. It’s a lifelong process to teach my fingers how to sing.”