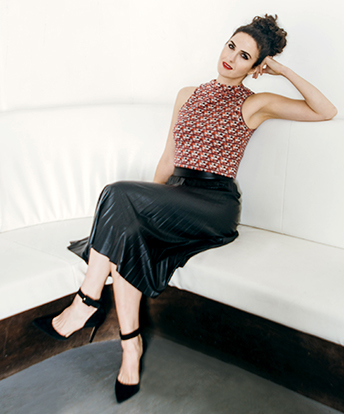 “Biali’s piano playing and ability to conceptualize puts her in the category of Patricia Barber and Dena DeRose. The piano on her own “Human Condition” is a tour de force that either of those two would envy. Her dynamic charts and the way she integrates her voice and piano are her most impressive achievement.”

Laila is returning to The Arts Council Evenings of Intimate Jazz after winning Canada’s coveted JUNO award in 2019 as Best Album of the Year for her 2018 self-titled album. Award-winning Canadian pianist and vocalist, Laila Biali, has been garnering world-wide recognition for her music which she has performed at prestigious venues including the North Sea Jazz Festival, Tokyo’s Cotton Club, and Carnegie Hall. She has toured with GRAMMY award winners Chris Botti, Paula Cole and Suzanne Vega, and recorded with and supported international icon, Sting. Her accolades include “SOCAN Composer of the Year” and “Keyboardist of the Year” at Canada’s National Jazz Awards. She takes the best of pop, rock, classical, world and soul, informs it with her expertise in jazz, and weaves it into her musical arrangements and original songs.

Her studio recording, Tracing Light, received a JUNO nomination in 2011 for “Best Vocal Jazz Album of the Year”, and her follow-up album, Live in Concert, was given an enthusiastic four-star review and named one of the “Best Albums of 2013” by DownBeat Magazine.