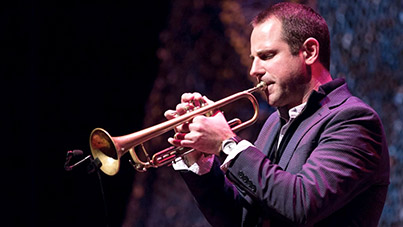 Trumpeter and Mack Avenue Recording artist, Dominick Farinacci graduated from The Juilliard School in 2005, launching his career in Japan with a prolific run of eight albums, and releasing four more globally. He has performed in more than 120 cities in 14 countries around the world and was featured on ABC’s Good Morning America. He gave a TED Talk in 2014 at the John F. Kennedy Center for Performing Arts, and has served as Ambassador to Jazz at Lincoln Center in Qatar from 2013-2015, working to further integrate music into communities around the world in culturally collaborative ways.

Farinacci had already achieved enough stature by his mid-teens that Wynton Marsalis offered to help him set his sights on coming to New York, and by 2001, Farinacci was one of only four trumpeters in the world to be selected as the inaugural students in The Juilliard School’s first jazz curriculum. During his school years and afterwards, Farinacci immediately distinguished himself as a soloist/bandleader/composer with a vision.

His most recent album on the major jazz label, Mack Avenue, is titled “Short Stories”. The record was produced by Tommy LiPumma, the most awarded all-time producer for records with Diana Krall, George Benson, Natalie Cole and more.