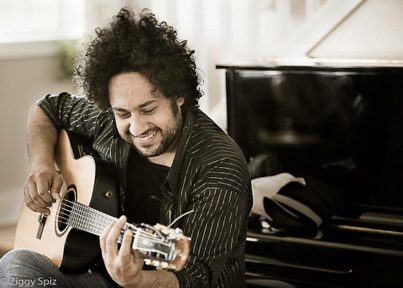 “Diego Figueiredo is one of the greatest guitarists I’ve seen in my whole life. The world needs to listen to his music” – George Benson

“…a true virtuoso, jazz guitarist Diego Figuierido. Yes, we were all mesmerized by his amazing head of hair. But it was his incredibly fluid and natural performance style, his sense of true enjoyment as he dazzled us and his good-natured entertaining approach that truly grabbed us. Wow. I don’t even know what else to say. Seemingly effortless and thoroughly fabulous.

Diego Figueiredo (pronounced fig-a-ray-doe) is considered one of the most talented guitar players in the world today. He is the winner of several important competitions including the Montreux Jazz Competition and the VISA Prize. He is only 37, and he has released 23 CDs, 3 DVDs, and he has played in more than 60 countries around the world. His music is a fusion between Jazz, Bossa Nova and Classical. Diego’s unique interpretations, along with his phenomenal technique and emotion, have created an explosion of adoring fans and concert goers. Having received awards twice at the Montreux Jazz Festival as one of the greatest guitarists in the world, Diego Figueiredo performs one amazing concert after another.

Diego Figueiredo is a brilliant musician who keeps the tradition of the true essence of Brazilian music and at the same time can be extremely virtuous, modern and innovative.