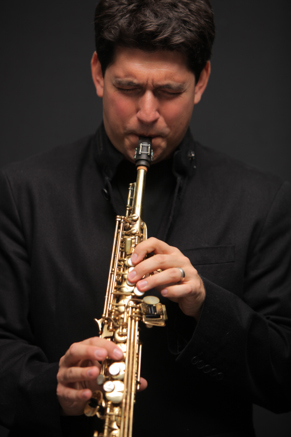 “The secret of serious fun is not to take too seriously, something this prodigiously talented singer/songwriter/saxophonist knows in his bones..” – The New York Times

“Bacher delivers scrupulous control, hip phrasing and the kind of savory scat I haven’t heard from a man in some time, certainly not one so young!.”

Danny Bacher is a singer, saxophonist, consummate performer and a fresh new face as jazz’s newest bright light – and man does he swing! His clean, crisp delivery is reminiscent of the true greats in entertainment. An engaging stage presence, a smooth-as-silk voice and his gift as a storyteller all come together to complete this package. Add to that his saxophone prowess, and you have one of the hottest musicians on the scene today. He is an actor, a writer, a comic, musician and a member of the legendary New York Friars’ Club.

Having honed his chops in NYC, the jazz capital of the world, Bacher exudes the emotion of a seasoned veteran performer, mixed with his own youthful vigor and bounce. He has a palpable, innate magnetism that can’t be taught. From his catchy, toe-tappin’ renditions of rare gems to classic takes on the Great American Songbook, Bacher is always at home on the stage and presents his case with elegance, style and class.

Danny Bacher (pronounced BACK-er) was born too late to experience these giants first-hand, but he has heard their music and received their message. Bacher’s singing, his soprano saxophone playing and his serious, yet outgoing, approach to the material in this homage to Louis A, J and P shine new light on vintage material.