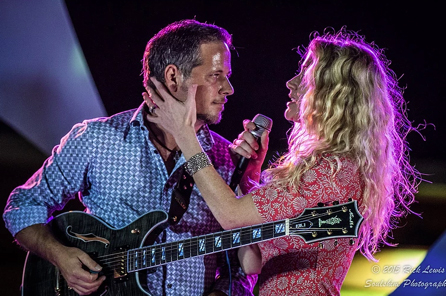 “Don’t let music of this magnitude go unnoticed. This is the best kind of medicine that gets into your system and cures the mundane by filling your heart with an appetite for all things awesome”

Ari and the Alibis is a 5 piece Jazz Funk and Soul fusion band that is composed of electric guitar, bass, drums, trombone and a power house vocalist and have been together since 2013. Based in Central Florida these 5 musicians bring a fun, high energy show with a flavorful taste of many influences that any music appreciator will definitely enjoy. Ari and the Alibis quickly became one of the top acts in their native Tampa Bay music scene, as evidenced by their nomination for best local band in Tampa Bay and Ari for best Jazz vocalist. In these short years, they have toured the U.S., Recorded their second album, and had two of those compositions “Dirty Little Secret” and “Bon Appetit” made Grammy NOD 2017. Their current sights are set upon expanding their reach into the northern hemisphere and making their debut in both Canada and Europe.

Their high energy live show has landed them performance slots at renowned venues such as Skippers Smokehouse, Jannus Live and the Tampa Hard Rock Casino as well as many Festivals. They have also performed in New York, Cleveland, Atlanta, Asheville, New Orleans, Los Angeles and Austin. In the summer of 2018, they expanded into Canada with concerts in Ottawa and Hamilton Ontario. On their way home, they were honored to be guest performers at Victor Woods nature camp Wooten Woods outside of Nashville Tenn. Their first album “Dirty Little Secret” made it to the last stage of voting for the 2016 Grammy Awards in two categories: Best Rock Song (Dirty Little Secret) and Best Rock Performance (Dirty Little Secret and Bon Appetit). Their highly anticipated sophomore release “Home” was released June 15, 2018. An all original, 15 track 76 minute long album that captures the versatility as well as the virtuosity of the group. The title track “Home” has already received an award for “Best original song by a local group” in the Bradenton Times “Best of the Bay” and are nominated for best regional band in Tampa Bay’s Creative Loafing readers’ poll of the same name. 2018 was a banner year for artist endorsement for the group. After their performance at the 2018 winter NAMM show, the group signed an artist deal with Sennheiser North America. Two months later, James Dabone became the first Trombonist to sign an artist deal with Cannonball Instruments. 2019 has been another exciting year for the group with friend and international tour manager Michael McGinn planning a tour for them in the UK and a return visit to Canada.