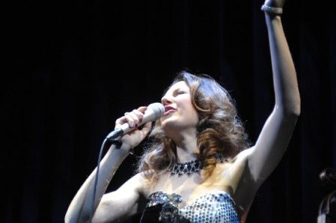 “Warm and rich vocals, so emotive they register in the keys of love and gratitude.” – All About Jazz

“Last night I listened to your CD twice. What I need to express is the utter joy I felt submerging myself in one of the most gratifying musical experiences I’ve ever had. From your rich tone quality, to your impeccable pitch, to your total control of your vibrato, to the correct scales for the changes, to your tune selection, and of course to your players, I was totally gassed. There are more accolades, but they would take too long to list. Oh, and it wasn’t lost on me that I live in Clifford Brown’s hometown when I was listening to “Joy Spring,” either. You wore me out with that one! You’re the real deal. Wow. Wow and bravo.”

Award-winning jazz vocalist Alexis Cole may be the most talented singer to ever hold a top-secret military clearance. A dozen albums into her critically acclaimed career, she may also be the best-kept secret in jazz, a status that’s certain to change as more people are discovering her for themselves. During her seven years in the Army’s Big Band, Cole had the opportunity to grow as a musician and a person, sharing the stage with ensembles as diverse as the New York Philharmonic and Kool and the Gang.

Winner of the 2007 Jazzmobile competition and an award recipient of the Montreux Jazz Vocal Competition, Alexis was cited as “a rising star in the jazz world” by Hot House Magazine. Christopher Loudon of Jazz Times says “Cole’s easy sense of swing is strongly reminiscent of Sarah Vaughan”. Ernest Barteldes for AllAboutJazz writes “Cole’s voice is inspired”. While Scott Yanow states “Alexis Cole grows in power, maturity and depth each year. She continues to have unlimited potential.”

Alexis has blossomed since leaving the service in 2016, trading her uniforms and fatigues for sleek cocktail dresses and chic hats, and focusing fully on her art. The singer’s career has taken on exciting new momentum, with recent accomplishments including gigs at celebrated venues like Carnegie Hall, Birdland, Jazz at Lincoln Center, and the Blue Note; and performances as a soloist with prominent orchestras such as the Boston Pops and the Detroit Symphony. Alexis also recently contributed a guest turn on pianist Harold Mabern’s star-studded album Afro Blue, alongside the likes of fellow guests Norah Jones, Gregory Porter, and Jane Monheit.

On the education front, Alexis Cole now heads the vocal program at the renowned conservatory at SUNY Purchase, and is a Jamey Aebersold-sponsored clinician. She’s looking forward to guest lecturing at the acclaimed Prince Claus Conservatoire in the Netherlands this coming academic year. This summer Alexis and her trio will take the stage for a residency at Bemelmans Bar in Manhattan’s famous Carlyle Hotel, following in the footsteps of Marian McPartland and Barbara Carroll.